Recently, I was working on a program to sample N frames from a source video, and then assign a score to each frame (from 0 to 1) in terms of thumbnail-worthiness. Before long, it became apparent that decoding video frames was one performance bottleneck. In this post, I would look into different ways of reading video frames with OpenCV and then speeding it up with multithreading.

Consider that a video is F frame long, we will need to select frame at the sample rate of S = F/N. Naiively, one could loop through the video and read every single frame.

However, each call to cap.read() would result in unnecessary decoding of frames to be discarded. Performance was intolerable. A better alternative would be to skip through frames and only decode the one that we need. Opencv grab and retrieve function can be used for this purpose (which are called by read function internally).

This simple modification would result in a much needed performance boost. But can we do better? Looking through OpenCV documentation, it’s possible to read from a specific frame by call to cap.set(cv2.CAP_PROP_POS_FRAMES, fno). The above snippet can be re-written as below: 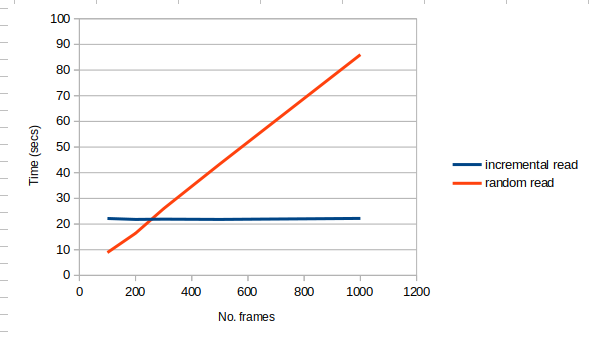 If neither of the above methods meet speed requirement, the next natural step would be to parallize frame reading. The idea is simple, instead of one thread reading through the whole video, we would have each worker thread read a continuous segment of the video.

A simple worker thread class can be implemented like below, which uses synchronized queue to communicate between main thread and worker threads.