In a recent conversation, my dear friend made the claim that once telecomunication providers like Viettel and VNPT have their mobile money licences approved, they would take over banks as providers of financial service providers. Banks would inevitably be sidelined. I frowned at the notion of an incoming onslaught of telcos as mobile money as a concept is not new. If one looks at it as the transfer and storage of monetary value via cellphone, that concept can be traced back to the era of feature phones. Back then, phone subscription owners could top up others’ mobile numbers with their existing mobile balances. Or services like ringtone, quizzes can charge users via mean of SMS. Thus mobile money has been in limited usage for long. And a few years ago, mobile wallets (e-wallets like ZaloPay, Momo…), smartphone applications that facilitate payment and money transfer via phone, already began their costly quests to acquire users. Then, what’s so big a deal about this mobile money development?

What is mobile money

Turns out, what made my friend excited about the mobile money license was not any additional use cases to existing mobile wallets but rather a elimination of requirements. In 2014, the State Bank of Vietnam mandated that each user of mobile wallets must provide a linked bank account of the same named holder [1]. The rule has been instrumental in stopping people from activating their mobile wallet. And it is a hinderance even to people with bank accounts but no internet banking service. My mom is an example.

What changed was that this year, the government is about to allow telecom companies (Viettel, VNPT …) to provide mobile wallet services without linked bank accounts. Now my mom can open her own ViettelPay account and have someone else help her top up the initial balance via transfering, the function that is built in most mobile wallets, and then start paying for her electricity bill right away.

Why is it bad for banks

Banks have long been the gate keeper to consumers’ pocket. They are uniquely paid to keep customers’ idle cash and enjoyed a direct relationship with customers and possessed all the data of customers’ cashflow and solvency. Banks then loan out the cash, pays part of the interest to customers and kept the rest. Besides, deep understanding of customers’ financial capacity allows banks to upsale insurances and mortgages. Traditional payment networks like Visa, Mastercard delegate customer signing up and relationship management to banks.

Despite the economic growth in recent years, only about 30% of Vietnam’s over 15-year-olds population have bank accounts [1] while mobile subscription covers more than 84% [2]. Arguably, Telecom providers would have access to this vast and unfragmented potential market. There are only 3 or 4 telecom companies dominating the local market compared to the great many banks. And acquiring users is just a matter of cultivating existing relationship. Thus telcos are well positioned to push banks to the fringe. Maybe one day, banks, deprived of their direct relationship with customers, would become providers of loans, saving plans on platforms controlled by telcos. Or worse, risk being replaced entirely. 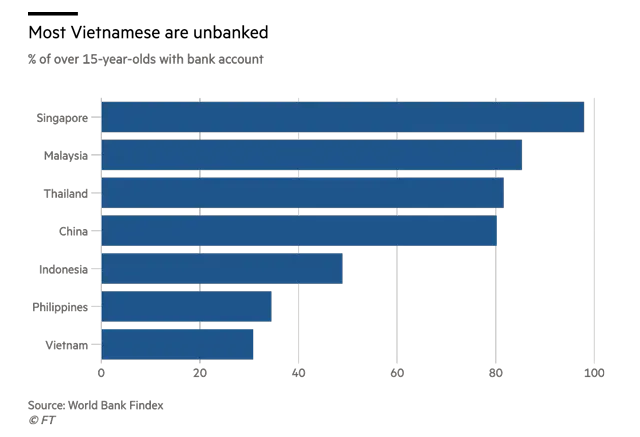 Why it is alos an opportunity.

Although the change in regulation is bringing forth new competitors to banks’ territory, it would be a mistake to forget opportunities that it would open up to financial institutions.

Firstly, the pie would get bigger and benefit every player, including banks. Instead of buying things with cash, more people would exchange goods and services by weilding the phone. Convenience aside, people would have access to their transaction history, which will be instrumental in determine one’s credit worthiness. Imagine that farmers can apply for loan by bringing their mobile wallets to a nearby bank branch. At the same time, banks would be able to better evaluate risk, avoid bad debt without over looking potential customers.

Secondly, in the long run, different mobile money systems would likely be connected, allow users to transfer fund seemlessly between their different wallets and accounts. When that happens, banks can participate as another wallet providers, competing on quality of services. One can already do zero fee money top up or withdrawal with the likes of ZaloPay, Momo. I’m thinking about a deeper level of interconnected-ness when a ZaloPay user can buys goods from a merchant who uses Momo. Maybe that would requires a shared payment protocol or a new intermediate payment network altogether. But I think it is a goal worth striving for. If an mobile application truly wants to act as a wallet, it should not dictate where the wallet owner can spend his or her money. In the Visa, Mastercard world, I can pay for my meal with either of them since they share the same standard. Besides, in order for mobile money to reach wide adoption, the system must have liquidity. One way to achieve that is to ensure the unhindered flow of money.

What should banks do now

Top of the list is to improve users’ experiences of mobile banking. Banking apps have always been a complex system with many functionalities, which may be one of reason why most banking apps out there feel like an tiring attempt to squeeze many things into a little estate. Opening up e-wallet like ZaloPay or Momo is much faster than openning a bank’s app. That is understandably due partly to the high security level imposed by banks. That said, banks could organize functions into sensitive and less sensitive groups, allowing users to enter the app much quicker for non sensitive functionality and only re-prompt for authentication when important actions are about to be taken. Besides, inter-bank transfer system can be improved upon to rival instant and zero cost transfer offered by e-wallets.

Furthermore, banks should experiment with some form of zero fee mobile first bank account. Opening a bank account involves a trip to nearby branches, which can be time consuming. And keeping an bank account can be costly if one does not have much money to deposit. Not to mention that card payment is not widespread. That is why most people don’t bother to have a bank account yet. Now with the spreading of mobile payment, it can be a possibility that customers can open a bank account instantly via mobile app and allow limited transactions before submitting all documents.

Last but not least, among the unbanked, banks can target youngsters specificially, who will soon grow up to be working and tax paying adults. One idea is to encourage opening bank accounts to children or dependants of existing customers. In an increasingly cashless world, parents still need to give their children pocket money. Opening family bank account meets that need and also secure a relationship with future customers for banks.